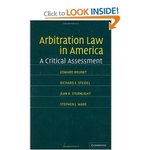 Arbitration Law in America: A Critical Assessment is a source of arguments and practical suggestions for changing the American arbitration process. The book argues that the 80 year-old Federal Arbitration Act badly needs major changes. The authors, who have previously written major articles on arbitration law and policy, here set out their own views and argue among themselves about the necessary reforms of arbitration. The book contains draft legislation for use in international and domestic arbitration and a detailed explanation of the precise justifications for proposed legislative changes. It also contains two proposals that might be deemed radical - to ban arbitration related to the purchase of products by consumers and to prohibit arbitration of employment disputes. Each proposal is vetted fully and critiqued by one or more of the other co-authors.