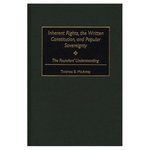 In recent decades the Ninth Amendment, a provision designed to clarify that the federal government was to be one of enumerated and limited powers, has been turned into an unenumerated rights clause that effectively grants unlimited power to the judiciary. Was this the intent of the framers of the Constitution? McAffee argues that the founders had a rather different set of priorities than ours, and that the goal of enforcing fundamental human rights was not why they drafted any of the first ten amendments. They did not intend to grant to the courts the power to generate fundamental rights, whether by reference to custom or history, reason or natural law, or societal values or consensus.

It has become increasingly popular to identify our constitutional order as an experiment in the protection of fundamental human rights and to forget that it is also an experiment in self-government. As fundamental as the founding generation believed basic rights to be, they saw popular authority to make decisions about government as being even more central to the project in which they were engaged. They supported natural law and rights, but they felt strongly that those rights did not bind the people or their government unless they were inserted in the written Constitution. They did not contemplate that there would be unwritten limitations on the powers granted to government.